Being an early Mark 1, the speakers in my car consisted of the two dash-mounted 10cm units, and an active bass box under the driver's seat that appeared to do very little. The head-unit had been changed at some point, but was a cassette tape unit, a technology I hate. So I replaced it with a Sony MDX-7970R minidisc head-unit, complete with remote control stalk on the steering column shroud. I then had a Kenwood KAC-624 2-channel amplifier installed under the passenger seat, powering two Pioneer TS-E1790 19cm circular 3-way speakers I had installed in the doors. I had ruled out having a subwoofer installed early on, as it would have compromised the space available to the occupants of the cabin, or the space available in the rear or front boots. So I chose the biggest speakers with the biggest magnets I thought would fit in the door panels, and I am very pleased with the result. The sound quality is excellent, and there is plenty of volume and bass, aided by the small volume of the cabin no doubt. The stock 10cm dash-mounted speakers are powered directly from the front outputs of the head-unit, but I plan on upgrading these as they are very poor. I left the active bass box out of the setup entirely, as it did very little.

I much prefer minidiscs to tape for audio quality and convenience reasons. I also prefer them to single CD players in cars, because CDs are difficult to change safely when driving. This was back in 1999 before the advent of in-car MP3 players, which would now be my choice. The MDX-7970R comes with a remote control stalk which I have attached to the left-hand side of the steering column shroud (i.e. on the opposite side to the indicator stalk). No UK Mark 1s had cruise control, so this space is free on UK cars.

I bought this amplifier back in 1993, and it is an excellent little two channel amplifier. I had it installed professionally under the passenger seat, which meant the wiring could be routed cleanly under the carpet and plastic door trims.

I had these installed professionally, as it looked very tricky and I wanted it to be done properly. They are located in the forward lower part of each door as can be seen in the photographs below. I have since removed and refitted the passenger door mounted speaker and that confirmed how fiddly the installation was. I did that because sometimes the window glass would catch on the speaker magnet just before it fully retracted, and I wanted to play around with it to provide a little more clearance, which seems to have been successful. I am not sure of the details of the installation, but obviously the door card has had a hole cut in it, and I think some metal behind that has been cut into as well. Three of the four self-tapping screws used for the installation screw directly into metal behind the card, but one has a metal clip into which it screws (almost like a nut on a bolt) behind the door card. I guess the installer either cut too much metal away, or there was none there to tap in to. Either way, it is a nice secure fit, and probably about the best that could be done. Here are some photos: 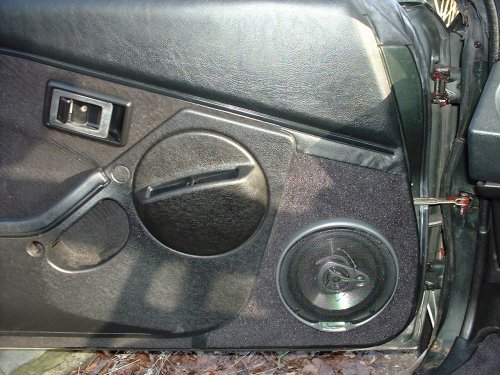 This is a general view of the speaker mounted in the passenger door. As can be seen, it is a tidy and unobtrusive installation. 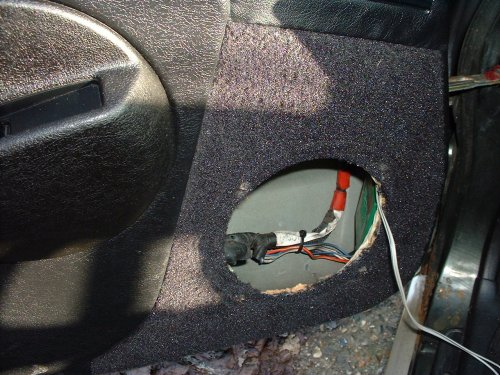 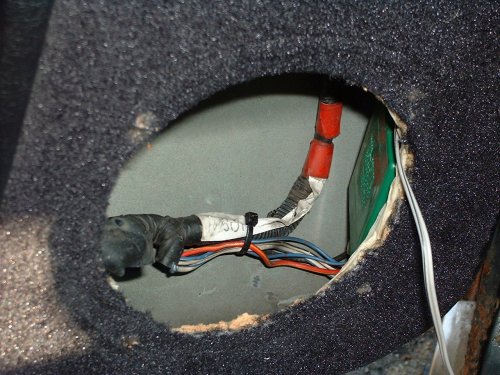 This is a close up of the hole for the speaker. Some metal may have been cut away on the right and left hand sides. That on the right can just be seen behind the door card (with masking tape over it, presumably to cover up the sharp metal).