This quick and easy upgrade gives two things: a small increase in performance due to the engine being able to suck in a little more air, and some great induction noises with the throttle open! The JR air filter I installed gives only a little more noise at motorway cruising speeds, so although it sounds great when accelerating, it does not get annoying when cruising. I should imagine other bolt on filters give similar results. One American website I came across while researching this subject detailed the installation of a K&N 57i filter on a later MR2 Mk1. The owner reported that the K&N gave an annoying whistle at cruising speeds, although this has been disputed by a number of members of the IMOC-UK. The JR air filter appears well made and is available in the UK from Fensport. 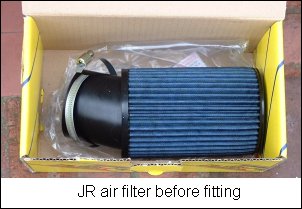 The JR air filter is a cylindrical filter approximately 20cm long with a rubber duct which is fixed over the throttle body using the supplied clip. Filtration is accomplished by the blue fabric mesh which is covered in filtration oil. Unlike the standard air filter element, the JR filter is not a throw away part: at regular intervals it should be removed and cleaned using an air filter cleaning solution, followed by application of filtration oil. Both these items can be obtained from Fensport along with the filter itself.

Only basic tools are required for this job: a socket set and some screwdrivers. The socket set should include an extension, and optionally a universal joint, as some of the air filter ducting bolts are a little awkward to get at. 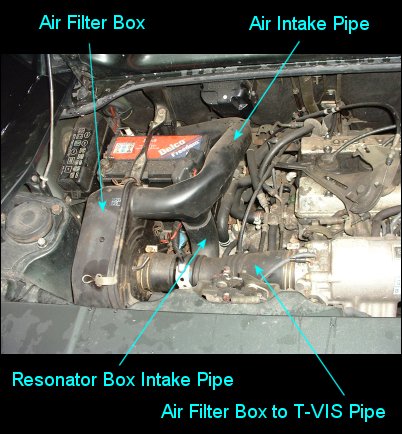 UK cars have an idle-up valve connected to the air filter box and T-VIS unit with a couple of rubber tubes. The function of this valve is to allow a little extra air into the throttle body (so boosting revs) when a high electrical load is placed on the alternator, which causes the revs to drop. I have blocked these tubes off without any adverse effect. They should be blocked (particularly the one connected to the T-VIS unit) to stop unfiltered air getting where it should not. 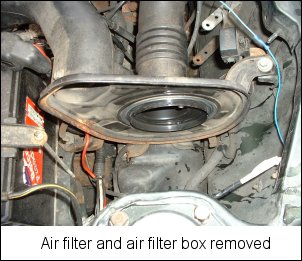 The next task is to remove the air intake duct. It is held on using two bolts: one anchoring it to a bracket forward of the battery that also holds the battery in place, the other holding it to the front panel of the air filter box. Simply undo both bolts and lift the duct clear. Also remove the foam pipe leading from the duct to the resonator box (it just pulls free). 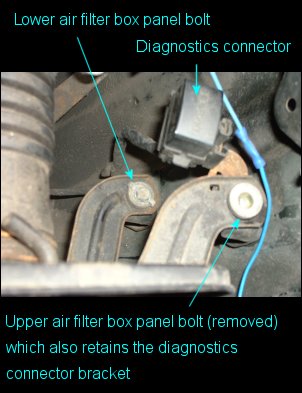 Removing the front panel of the air filter box is a little more tricky. It is held in place using three bolts: one anchoring it to the battery tray, and two anchoring it to small brackets attached to the rear bulkhead. You will need an extension bar to reach the battery tray bolt, and a universal joint is useful too. Be careful here as you will be working very close to the positive battery terminal; it is advisable to disconnect the battery negative terminal to prevent any accidents. The upper of the two bulkhead bolts is simple to remove, the lower is easier to remove if you first pull the diagnostics connector off its bracket which is held in place by the upper bolt. 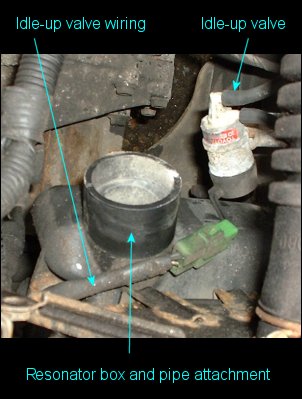 Now slacken off the screw on the jubilee clip holding the pipe to the T-VIS unit. You can now lift the front panel clear of the engine bay with resonator box and T-VIS pipe attached. Be careful not to catch the idle-up valve wiring as you do so. My idle-up valve was hanging free in the engine bay as can be seen in the photo, left, but it should have been bolted to a bracket somewhere. Note the two rubber tubes connected to the top of the idle-up valve in the photo, left. These need to be tidied up later (see below). 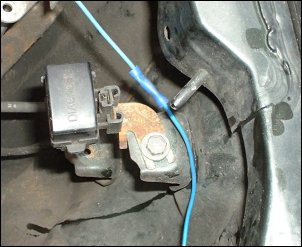 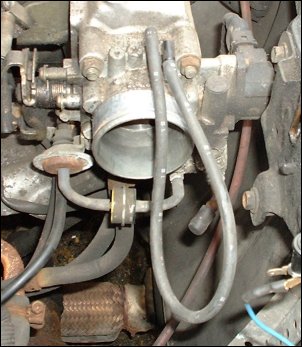 While the throttle body is exposed, run your finger or a clean rag around the inside of it to remove some of the oily gunge that builds up in there, presumably due to the PCV system. Next, disconnect both tubes from the idle-up valve. Connect the free end of the one coming from the T-VIS unit over the rubber cap blocking off one of the other T-VIS connector pipes. This is UK-specific - if you have a non-UK car you may have to block this tube off in a different manner - but it is important do so otherwise it will suck unfiltered air into the throttle body and onwards into the engine. 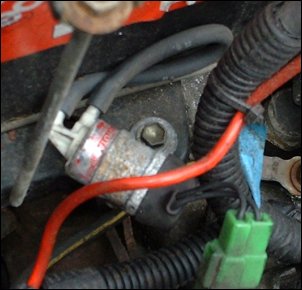 The idle-up valve will now have a tube dangling free. Connect the free end to the connection left free by disconnection of the T-VIS tube detailed above. This now seals the idle-up valve and protects it from dirty air should you wish to use it in the future. Now bolt the idle-up valve to the bracket on the battery tray that was used to anchor the air filter box panel. 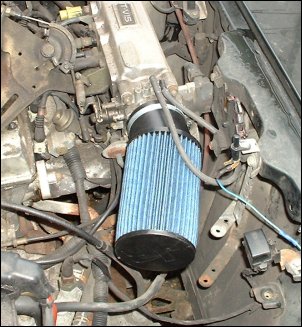 Fit the rubber duct of the JR filter over the air intake on the T-VIS. It is quite stiff but it will fit. The rubber duct is at an angle to the filter, which is useful as the engine bay hood would come into contact with the filter if it was left straight. Turn the filter until it is pointing downwards a little, and check it is clear of the engine bay hood by lowering the latter slowly. Now tighten the screw on the jubilee clip, making sure the metal band of the jubilee clip is clamping the duct to the intake in the area of the intake behind the lip on the end of the intake, to ensure it is secure.

Now check the engine bay for any left-over tools and start the engine. If everything appears ok, drop the engine bay hood and take the car out for a drive, enjoying the various intake sounds under acceleration etc. When you get back, have another look in the engine bay to make sure the filter and the idle-up valve tubing is as you left it. Check again a few days later too.

The filter should be cleaned and oiled every so often. The instructions do not specify the interval so I am going to do this at every service. A pack containing both the cleaning solution and the filter oil is available from Fensport when you buy the filter or at a later date.

I found that the filtration oil did not last very long at all, presumably it is rapidly sucked into the engine. So I increased the frequency at which I applied it. Even so, I suspect the filtration of this kind of filter is not as good as the original paper filter, and engine life may be shortened accordingly. You may wish to consider this before replacing the original.