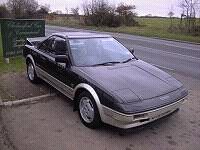 This buyer's guide is intended to help the potential purchaser of a Toyota MR2 Mark 1 thoroughly check out any vehicles he chooses to look over and test drive. This guide concentrates on the specifics of checking a MR2 Mark 1. if you require general information on checking used cars, check out this guide from Autotrader, and also this section of the Which? website for information on the legal aspects of buying a car and how to reduce the risks.

If you have any additions or corrections to make to the text below, please mail me at nick@challoner.com.

This guide is for information only. Although every care has been taken to produce an accurate and comprehensive guide, I cannot be held legally responsible for any direct or indirect loss due to its use. Use of this guide indicates your understanding of these conditions. Basically, I have produced this to try and help people - please use it in that spirit.

This page has a UK bias as that is where I live and where I checked over cars. Mk1 MR2s are pretty similar the world over though, so most of what is written below should be applicable wherever you live. Where I refer to left and right, I mean left and right as though you are sitting in the car looking forward (so in the UK left is the nearside and right is the offside).

If you follow the above then you should end up with a pretty sound motor! Here are some tips on getting started with your new pride and joy:

This guide was originally based on a checklist I put together for buying my Mk1 MR2 using material from a number of sources: the buyer's guide on the MR2 Driver's Club website formed the basis, to which I added a whole load of material I had gathered over a few months of being subscribed to the IMOC-UK mailing list. More recently I have added material from my experiences of owning a Mk1 MR2. Last but not least the following have all provided invaluable information: Jamie Ayres, Daniel Basterfield, Alan Head, Jimi Lawson, Tim Morton, and Westfield Motors, Essex