People regularly ask for information on instrument panel warning lights on the IMOC-UK mailing list. This is understandable given that all MR2s have some warning lights not commonly found on other cars, and of course with second hand cars often an owner's handbook is not supplied with the vehicle. So here is an annotated photo of my instrument panel. The meaning of some of the lights are obvious, but I have included them all for completeness. All the warning lights (except the low fuel level and door open lights) illuminate when the ignition key is turned to 'On' but the engine is not started (if not, check the bulb). Note that my car is an early UK example and therefore will be slightly different to later cars or those supplied in other countries. The non-standard stalk in the bottom left of the picture is the remote control for a Sony minidisc player that I have fitted. 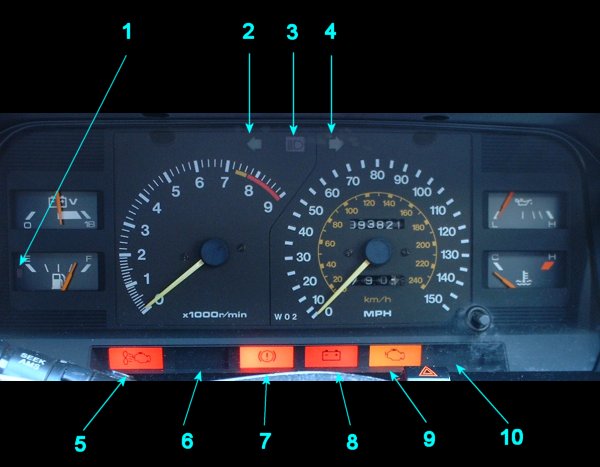 There is one other warning light: the door open warning light. This is located to the right of the instrument panel low down on the side of the plastic housing and is not shown in the photo above. Obviously it illuminates if one of the doors is not closed properly. Apparently this warning light is situated where it is so that it can throw light on the ignition switch area to help you insert the key when it is dark. Thanks to Jamie Ayres for that snippet of info.

Remember that if a warning light is illuminated and the system to which it relates appears to be working correctly, the problem could lie with the warning light sensor(s) or wiring.